Rajkot Dist Digital HD Map Pdf Download.
Rajkot, located in Gujarat is a center of commercial and industrial importance. It was founded by Vibhoji and used to be the capital of Saurastra. The Aji river flows through this district .
Rajkot is centrally located in the Kathiawar peninsula. It had a population of 18,00,000(2001 census). It has numerous primary schools, 5 Institutes of Technology, 90 high schools and 20 colleges. Rajkot is well connected by domestic airways, rail and road. 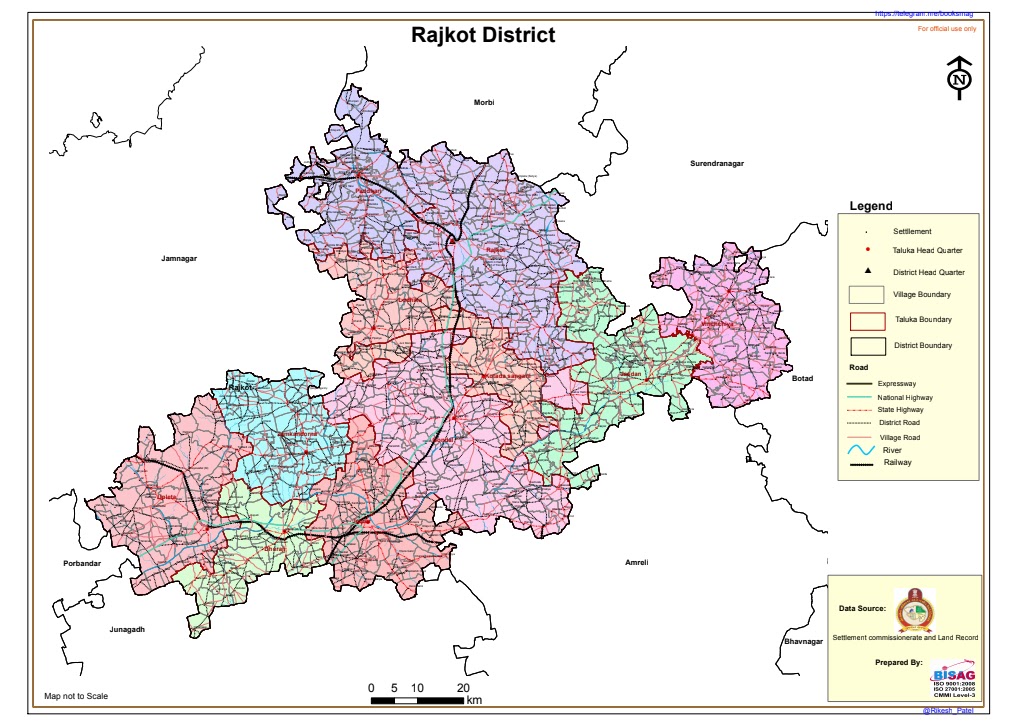 Rajkot is known as the birthplace of the Gandhian Non Violence movement. It is famous for manufacturing jewelry, woolen and cotton textiles, handicrafts and bandhni textiles. Places of tourist interest in Rajkot are the beautiful lakes around Aji Dam, Rashtriya Shala, Rajkumar college and the beautiful Jagat Mandir dedicated to Shri Shri Ramakrishna Paramahansa. The Tarnetar fair, which is yearly held here to celebrate the legendary marriage of Arjuna and Draupadi attracts many tourists.
Gujarat is the Western most state of India. It is bounded by the Arabian Sea in the west, shares its borders with Madhya Pradesh in the east, by Rajasthan in the north and northeast and by Maharashtra in the south and south east. Gujarat has a common frontier with Pakistan at the north western fringe and is an international border. Gujarat was formed in the year 1960; carved out of the 17 northern districts of Bombay state when that was split on a linguistic basis (Marathi-speaking) Gujarat is an industrially advanced state, and although it is not a popular tourist destination among foreigners, it still holds an important place in India. The people of Gujarat are also known to be a successful business community.