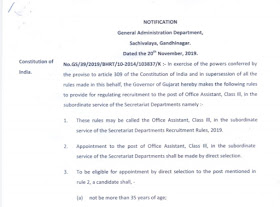 Appointment to the post of office Assistant , Class III , in the subordinate service of the Sekretariat Departments shall be made by direct selection , 3 . To be eligible for appointment by direct selection to the post mentioned in rule 2 , a candidate shall , - ( a ) not be more than 35 years of age ; ( b ) possess , a bachelor ' s degree obtained from any of the Universities established or incorporated by or under the Central or a State Act if1 India ;


any other educational Institution recognised as such or declared to be deemed as R University under sectiLT 3 of the University Grants Commission Act , 1956 or possess an equivalent qualification recognised by the Government , ( c ) possess the basic knowledge of computer application as prescribed in the Gujarat Civil Services Classification and Recruitment ( General ) Rules 1967 ; ( d ) have a speed of not less than 5000 key Depressions with accuracy per hour for data entry work in English and Gujarati ; and ( e ) possess adequate knowledge of Gujarati or Hindi or both .
New GR : Office Assistant education qualifications 2019-11-25T06:02:00-08:00 Rating: 4.5 Diposkan Oleh: Niya