Home / EDUCATION NEWS / Facebook launches new feature to stop on Fake News Be Alert otherwise the account will be blocked.

Facebook launches new feature to stop on Fake News Be Alert otherwise the account will be blocked.

Facebook launches new feature to stop on Fake News Be Alert otherwise the account will be blocked.

In the past few years, Facebook and WhatsApp have caused numerous incidents such as storms and mob lynching due to spread of false news ie fake news. There was constant pressure on Facebook to avoid these incidents. Facebook has now launched a new option to detect and eliminate false news in India.
With the help of Artificial Intelligence and Third Party Media Agency
Continuous Fake News Shareer's account may also be blocked
Now with the advent of this new feature, if a user posts a fak news or false fact on Facebook then he will be alerted to the post with 'False Information' ie 'false information'. Information about this feature was obtained from a freelance security researcher. It is noteworthy that there have been many incidents due to the spread of fake news through platforms like Facebook and WhatsApp.
The government then put a lot of pressure on these two social media giant companies on the subject. According to the NCRB report, in the year 2017 there were 170 cases of fake news in the country.
Bad news for users of Whatsapp, so much message can now be sent simultaneously
These 2 rules are changing from December 16, know otherwise you will regret
The big announcement from the government about the canceled electrical assistant exam, these candidates are.
This feature was started at the time of the election, but at that time this warning was only issued to the person who shared the post. However, the company has now started alerting the rest of the users. Facebook has made some partners for it in India as well.
Understand how this feature works with these screenshots 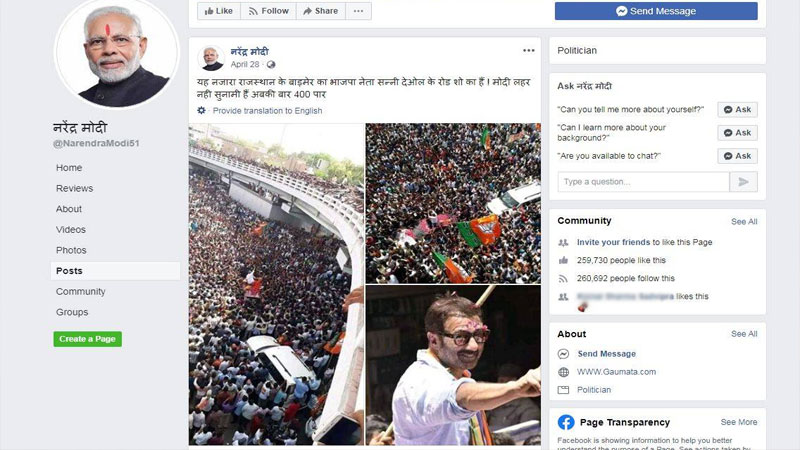 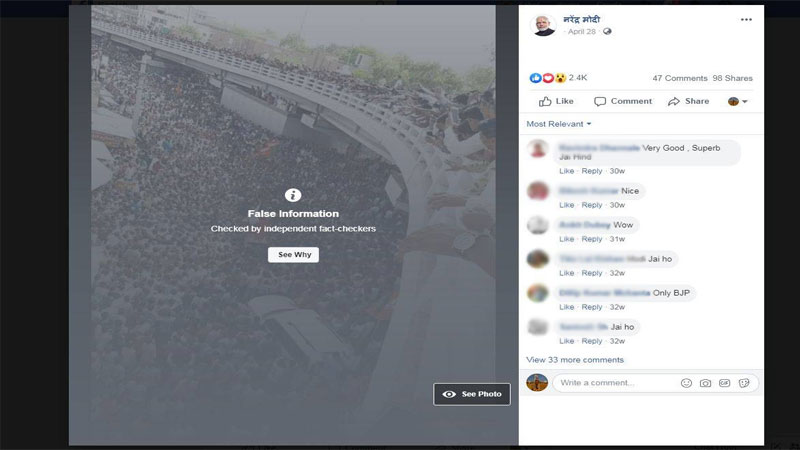 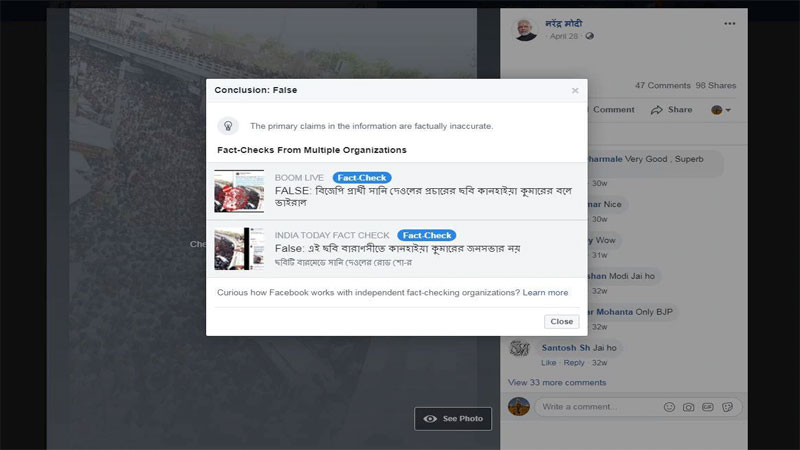 Researchers say that Facebook has also begun to identify fake news and false facts and remove them from the website. For this, the company is resorting to Artificial Intelligence and Machine Learning. Researchers believe that in a large country like India, it is very difficult to identify such fake news or false facts and remove such posts from the website.
For this reason, Facebook first identifies such posts and photos with the help of Artificial Intelligence and Machine Learning. These are posts that are going viral very quickly and are emotionally connected to people. Then Facebook examines them through a link to the third party, ie, the real news of the media. All this is done by robots.

If the fact of the post or any news is found to be false then a warning sign will appear and by clicking on it you will know the actual information about that post or fact. Any user can identify fake news on Facebook and report it immediately to Facebook.
If a factchecker rates a news story as fake, it will appear below the news feed. This will reduce the number of people who see it. Often posting false information, fake news or false facts on Facebook may result in action against that user's account or even block his account.
Social media giant Facebook has said that it has initiated a series of measures, including blocking fake accounts to combat fake news, proactively monitor abuse and increase advertisement transparency as part of its efforts to prevent outsiders' interference in any general elections across the world.
Facebook has been facing criticism for helping to spur violence and for its policies surrounding misinformation in general.
Mark Zuckerberg, Facebook's founder and CEO, had to face grilling in the US and in the European parliament over the Cambridge Analytica scandal, in which Facebook was accused of unduly influencing the 2016 US electoral process.
MarkZuckeberg
The social media giant has done some work in the first half of this year to combat fake news all around the world like in Italy, Colombia, Turkey, and even the primaries for US midterms. By the end of the year it will have focused on more than 50 national elections all around the world, Samidh Chakrabarti, Facebook's head of the civic engagement, said.
Using machine learning Facebook has gotten more effective at either blocking, or quickly removing fake accounts.
"That's important since they're often the root of a lot of the bad activity that we see on our platform. We're now at the point that we stop more than a million accounts per day at the point of creation," Chakrabarti said.
Facebook Data Breach Making Headlines, Here's How Other Scandals Beganof 6
NextPrev
The Facebook leak was traced back to Aleksandr Kogan, an academic at Cambridge university. Here is the root of other such worldwide breaches. (Image: Twitter/@AleksandrBKogan)
Facebook continues to expand its effort on combating fake news with 27 third-party fact-checking partners in 17 countries.
"We continue to bring increased levels of transparency to online political advertising," he said.
And finally, Facebook is proactively monitoring for abuse. "We've been able to apply powerful computational techniques that are traditionally used to fight spam and apply those to the civic space. And that's really made great advancements recently in our ability to precisely detect and disrupt organized information operations," Chakrabarti said.
To make this happen, Facebook is investing both in technology and in people. Members dedicated to this work having recently passed 15,000 and closer to 20,000 people by the end of the year. The social media giant reviews reports of bad content in over 50 languages, which it does round the clock.
Facebook Innovations That Turned Out To Be Dudsof 5
Facebook recently shut down 'Lifestage', its standalone social networking app that it released a year ago for high schoolers. The Snapchat-like app was intended to help teens find and connect with other classmates who went to their school. Only users aged 21 or younger could sign up for it.
According to Chakrabarti, Facebook is working with groups like the Digital Forensic Research Lab at the Atlantic Council, which works closely with its teams to get them real-time insights and intelligence on emerging threats and disinformation campaigns from all around the world.
It also includes collaborations with government, he said adding that it is working with a superior electoral court and regional court and electoral law enforcement authorities, particularly around online ads.
Responding to questions, Facebook officials did not confirm if Russia is meddling in the US midterm elections.
F8 Developer Conference: Facebook Plays Cupid, Will Find You Love & New Friendsof 6
F8 Developer Conference was a power-packed event for Facebook after the recent Cambridge Analytica data scandal. The social media platform giant pledged to build its way out of the worst-ever privacy debacle, and introduced a series of features and updates to improve user experience. The company is also building a new privacy control - clear history - which will enable users to delete browsing history. Moreover, internet celebrity Pomeranian, Jiff, also made an appearance at the event. Here's a rounded up all the highlights from Facebook's F8 Developer Conference of 2018.
"We know that Russians and other bad actors are going to continue to try to abuse our platform... during the US midterms and around other events and elections," said Nathaniel Gleicher, head of cybersecurity policy efforts, Facebook.
"We are continually looking for that type of activity, and as and when we find things, which we think is inevitable, we'll notify law enforcement, and where we can, the public," he said.
"We are looking for this sort of activity and these are ongoing investigations. And one of the things we have to be really careful with here is that as we think about how we answer these questions, we need to be careful that we aren't compromising investigations that we might be running or investigations the government might be running," Gleicher said.
Fecebook CEO Zuckerberg had promised in last April to ensure security and transparency on its forum ahead of elections in different countries.
Read This News Report