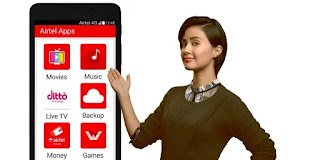 Airtel offers many benefits to its customers at low prices. Android Users Talking about the company's range of Rs 150, there are several schemes in which the benefit of free calling is provided.  Here we are talking about a plan of Rs.149.  So let's know the full details. 149 plan of APK Under this scheme, users are given the benefit of unlimited calling on any network.  The plan is providing users with a total of 2 GB of data.  A total of 300 SMS will also be available.  The validity of the scheme is 28 days.
Will receive such benefits with Internet This will give customers the convenience of free hello tunes. In addition, the benefits of Unlimited Wink Music and Airtel Extreme applications are also provided.  Airtel Extreme includes more than 370 live TV channels, more than 10,000 movies - TV shows & Google Searches This special service has been discontinued Airtel has ended its subscription for 3 months with its broadband plan.  The company has also updated this information on its website.  Note that existing users will continue to receive this feature until validation expires.  However, with Airtel plans, customers are still being offered a subscription to Amazon Prime for one year, which costs Rs 999. According to reports, the partnership between Indian Airtel and Netflix has ended, due to which users will no longer be given free subscription to Netflix with any plans.