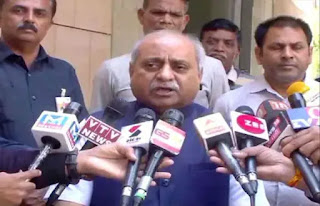 Deputy Chief Minister Nitin Patel's meeting with representatives of the non-reserve category has been completed to resolve the LRD reserve circular.
After the meeting, Nitin Patel said, "Non-reserved category representatives have described their problems to us." We will present these matters to Chief Minister Rupani.
Chief Minister Rupani will take a final decision on this. On the other hand, Dinesh Bambhania, a representative of the non-reserved category, said the meeting with the government has been positive. The decision will be taken by the Chief Minister. Our movement is currently underway.
The government announced the cancellation of this circular to curb the movement of reserved category people, as well as non-reserved category people started the movement.
Dinesh Bambhania said that state legislators should cast their votes by 4 pm.
The Congress, on the other hand, accused the government of defrauding scams. Congress provided evidence of a recruitment scam in government jobs. The Congress alleged that he had given jobs by taking rupees on the basis of false marksheets, syllabus and certificates.
Earlier, 254 women who had passed the LRD exam earlier this year reached the high court and demanded a letter of appointment from the state government.
What did Dinesh Bambhania say?
In this regard, Dinesh Bambhania said, "If the government does not accept our demand, we will get on 120 days fast. Police arrested Raj Shekhawat and Dinesh Babbania of the Karani army. However, they were released shortly afterwards.
Read in Gujarati: Click here
LRD Controversy: Meeting of non-caste leaders with government completed, Nitin Patel made a statement 2020-02-14T02:43:00-08:00 Rating: 4.5 Diposkan Oleh: Niya