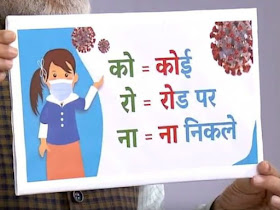 These are the main excerpts of the Prime Minister's speech.
The next 21 days will be a lockdown from 12pm
Even rich countries have been plagued by the epidemic of Corona.
Corona could not be stopped in these countries even though the equipment was rich. That is why it is impossible to prevent the corona virus from spreading.
I announce the lockdown across the country for another 3 weeks.
The countrymen have to follow it tightly because there is no other way to remove the corona.
Even wealthy and wealthy countries such as the United States, Italy, Spain, France and Germany have not been able to withstand the influence of Corona.
The experience of these countries concludes that Corona will have to stop spreading in the second or third week.
Corona has only one meaning: No one goes out on the road.
At Rogerjo we have to make sure that we keep ourselves safe, protect our family and protect our country.
May we all stay home and pray for those who are curing themselves at risk.
The doctors, nurses, pathologists, wardboys, ambulance drivers working in the hospital serve each other without worrying about himself or his family.
Every employee involved in the work of cleanliness and sanitization deserves a salute.
To give you the right information, consider the media workers who are working around the clock, risking the transition.
Stand by the road and worry about the police and law enforcement. Thank you.
WAO says an infected person can affect hundreds of people in a week or ten days. It spreads like fire.
The number of people infected with the corona virus took 67 days to reach 1 lakh, then another 1 million became infected in 11 days, followed by four days from 2 lakh infected people to 3 lakh.
You can estimate how quickly it spreads. When it starts to spread, it's hard to stop it.
China. In many countries such as the United States, France, Italy, Iran, the situation began to wane when the corona began to spread. Italy has the best health facilities in these countries all over the world. Yet these countries could not diminish the influence of the Corona.
All necessary steps are being taken in the country. There will be no shortage of supplies. Medical facilities are being enhanced. Healthcare is the priority of the entire country right now.
Don't spread rumors, don't believe rumors. Don't send news to others without verifying it.
IMPORTANT LINK :::