Knowing Trump’s statement against a 21-day

Knowing Trump’s statement against a 21-day

Knowing Trump’s statement against a 21-day lockdown in India would be mind-boggling; Anxiety spreading across the world. 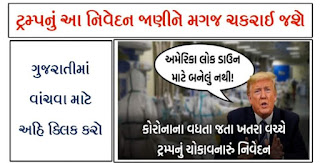 The coronavirus is now meeting America after China and Europe. New cases and fatalities have hit the record highs in the United States, and experts say the situation will continue to worsen. Meanwhile, on Twitter and in a press conference, US President Donald Trump made a surprise statement that the United States could not tolerate the lock-down situation for a long time, and that business would begin soon, as planned in the United States.
It is noteworthy that the death toll has not yet reached its maximum, but Donald Trump is making this statement in the wake of America’s weakening economy. Trump says the USA is not going to be a lockdown, it has to be open. He indicated the current US lock-down would be opened quickly.
What is America’s Statistics
It is noteworthy that in the United States, 3-5 thousand new cases have been coming up in the last 5 days. The death toll is breaking new records every day. In New York, there are more than 6 cases reported in the heart of the United States. With more than 5 deaths and more than 5 cases, the US seems to be fast following Italy.
Trump also said that if doctors were to run they would put the whole world in lockdown. This statement has been heavily criticized. People are arguing that Trump is giving business, economy and the stock market more importance than people’s lives.
The Trump government has divided itself into two camps, one in support of its health officials or the lock-down, while the other is its political and finance department officials who are advocating for the economy.
There are reports that the Trump government is planning to slowly and carefully open the lock-down, whereby young people will be freed first, who are at relatively low risk of infection.
WHO’S SAID?
WHO Spokeswoman Margaret Harrison, when asked by the media whether the number of transit cases in the US is likely to be higher than in Europe, said, “We are in complete doubt about this happening when we are seeing a sharp rise in the number of cases facing the United States.”
It is also worth mentioning that WHO has commended the steps taken by the Government of India regarding lock down and warned all countries that lock down is the most effective way in these circumstances. At this time, Donald Trump’s statement has created an atmosphere of wonder and awe among the people.
ગુજરાતીમાં માહિતી માટે અહીં ક્લિક કરો.
Knowing Trump’s statement against a 21-day 2020-03-28T09:38:00-07:00 Rating: 4.5 Diposkan Oleh: Niya

Academic year - Matter of taking school examination of standard 9 to 12 in 2020-21 With the approval of the Government obtained on the sing...