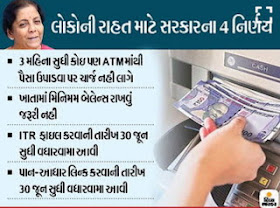 Interest payable on paying TDS modes has been reduced from 12% to 9%
Last date for filing income tax for FY 2018-19 has been extended till June 30.

Finance Minister Nirmala Sitharaman says work on relief package for crisis-hit industries will continue, announcement soon
The country is struggling against the transmission of coronavirus. Meanwhile, the government has given big relief to the people on Tuesday. Finance Minister Nirmala Sitharaman held a press conference after discussing the current situation with Finance Ministry officials. In the meantime, he said that a relief package would be announced soon for businesses facing crisis. Thus, while giving relief news to the Aam Aadmi, the finance minister said that Agami would not have to pay any charges for withdrawing money from any ATM for three months. Apart from this, the condition of keeping a minimum balance in the bank account has also been exempted. Sitharaman said the date for filing the ITR and linking the Pan-Aadhar has been extended till June 30.
Government Announcement For Relief
Interest payable on paying TDS modes has been reduced from 12% to 9%e deadline for filing income tax for the financial year 2018-19 has been extended till June 30.
The dispute has also extended the term of the trust scheme till June 30. Support and page linking dates have also been extended.

Companies with a turnover of less than Rs 5 crore will have no interest, penalty and late fee on filing a Late GST. Filing dates were extended to June 30 in March-April-May.
Relief for exporters and importers, custom clearance is now included in the services required by June 30. Should work 24 hours.
This year, the directors of companies have been relieved of the necessity of staying in the country for 182 days.
The bankruptcy process will be initiated against companies with a turnover of less than one crore.
Economy Toward Recession Due To Transition
The country's economy was sluggish even before the spread of the coronavirus, though now it is being expressed that it is likely to go down due to the spread of coronavirus. In addition, curfew in many states and lockdown in almost the entire country has recently hampered industrial activities.
The Finance Minister Informed The Press Conference By Tweeting

The government is planning to bring in an economic package to prevent the damage caused by the spread of coronavirus. The Minister of Finance pointed to the package in a tweet. The finance minister said he would hold a press conference on the rules through video conferencing. Before the coronavirus spread, the country's economy had slumped. After the spread of Covid 19, the difficulties against the economy have increased tremendously. The finance ministry and the RBI are taking several steps to increase liquidity. Due to the increase in transit, lock-down has taken place in almost all the states of the country and curfew has been imposed in some states. This is affecting the industry badly.
click here for news

Khedut Sahay package 3700 crore The historic five-day monsoon session of the Gujarat Legislative Assembly has begun. The legislature saw a...