Home / NATIONAL NEWS / Decision in Corona Crisis Providing Free Test-Treatment to 50 Million People Who Come Under the Scheme, Know if You Will Benefit 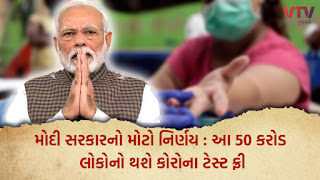 The central government is in action mode in view of the growing corona virus in India.  While Prime Minister Narendra Modi and the government are constantly making big decisions on the Corona virus, the Union Health Minister has made a big announcement for the Corona Test.
How to get benefits The central government today made a big decision in the fight against the Corona epidemic.  The Ministry of Health has said that tests and treatment of Corona virus infection will now be done under Ayushman Bharat, the Prime Minister's Public Health Scheme.  It is noteworthy that the corona test and treatment is being done free of cost in a government hospital now.  There are currently 50 million people under the scheme who will benefit from corona testing. Benefits will be received at Ayushman Yojna Hospital Hospitals under Ayushman Yojana will be able to avail the facility at their own level.  However testing will be done only under the supervision of ICMR.  In addition, private labs that have been approved for testing will also have to comply with ICMR guidelines.
Which Private Lab Will Test? Private labs that have NABL approval for the PCR test of RNA virus will be tested in the same lab and will be tested only when a doctor has advised the test. Health Minister made a statement Union Health Minister Dr Harsh Vardhan said that in the time of crisis, the people of the private sector also have to fight together.  Under the Ayushman Yojana, tests and treatments can be made available to more people.  These measures will help the poorest to fight the epidemic. The government's decision will benefit The government's decision will now bring a large number of private companies for corona testing and treatment.  At present, the corona virus cases are increasing very rapidly in India, this decision will help many people to fight corona.  At the same time, many state governments are preparing a list of hospitals that can be converted into Covid-19 hospitals.