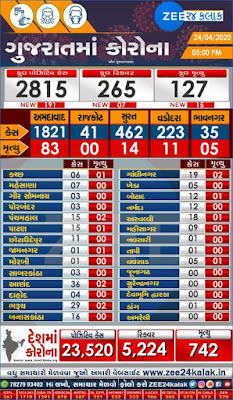 Ahmedabad. In the last 24 hours, 191 new cases of corona have been reported in the state, while 14 patients died in Ahmedabad and 1 in Surat, bringing the total number of deaths to 15. While 7 patients have recovered. Thus the total death toll has risen to 127 and so far the total number of patients has been 2815 and 265 patients have recovered.Giving an update on Corona, the state's front secretary of health Jayanti Ravi said 191 new cases have been reported in the state in the last 24 hours. These include 169 cases in Adavad, 6 in Surat, 5 in Vadodara, 3 in Anand, 3 in Panchmahal, 2 in Bhavnagar and 1-1 in Valsad, Botad and Gandhinagar. While 15 patients have died. Of these, 14 died in Ahmedabad and 1 in Surat and 7 patients recovered. Out of a total of 2815 patients, 29 are on ventilator and 2394 are stable while 265 have recovered and 127 have died. So far 43,822 tests have been conducted in Gujarat out of which 2815 reports are positive and 41007 reports are negative.Regarding the serious condition of Corona in the state, Chief Minister Rupani today told the media that the transition has increased due to people coming from Nizamuddin. If curfew had not been imposed, the situation would have been worse. Mortality is 3 to 4 percent No need to fear. 70 to 80 per cent of the cases in the state are from Surat, Ahmedabad, Surat and Vadodara. Doctors are currently working 18 hours a day despite being infected. There is no shortage of ventilators in the state.Pregnant corona tests will be conducted in cluster-containment areas and in labor camps.The Chief Minister has directed the Health Department to ensure that pregnant women living in cluster containment areas as well as labor camps run for workers in the state and those who have been shifted from hotspot district centers who have labor pains or are about to give birth in the next five days have no symptoms. Also a precautionary form of maternity health care Such sisters should be tested for Covid-12.

Curfew has been lifted in Ahmedabad, Surat and Rajkot. The people have cooperated in the curfew. A total of 223 arrests have been made in 198 cases of curfew violation in Ahmedabad. Similarly, 158 people have been arrested in 155 crimes in Surat and 143 people in 129 crimes in Rajkot. Thus a total of 482 offenses were registered in the state during the curfew out of which 544 accused have been arrested. 51 offenses have been filed using drones and 6 offenses using CCTV. The lockdown continues till May 3, so strict enforcement of the lockdown will continue at all places. State police chief Sivananda Zhao said strict enforcement of the lockdown had been imposed where curfew was in place and the transition was more widespread. Two positive cases have been reported in Ahmedabad district today. A total of 20 positive cases have been reported in the district against two cases in Bopal and Jetalpur of Daskaroi taluka. In which only 15 cases have come up in Daskaroi. At the same time, a total of 2628 cases of corona have been reported in the state so far.

The office of 98 Sub-Registrar will be started in the state, the registration of documents will have to be done online

Government work is being started gradually in the state. Chief Minister's Secretary Ashwini Kumar has informed that 98 sub-registrar offices will be set up in the state. However, social distance must be maintained in the office of the Sub-Registrar and registration of the document has to be done online. About 40,000 industries have been started in the state and about 5 lakh workers have returned to work, the chief minister's secretary said.A 61-year-old man from Thangarh in Surendranagar was arrested from Corona, Travel History Botad.The first positive case has been reported in Surendranagar district. A 61-year-old resident of Thangarh in the district has tested positive for corona. This person's travel history is from Botad. Corona's positive case is now rife in the district system. Another positive case has been reported in Gandhinagar. A doctor in Gandhinagar has received a positive report from Korona. With this, a total of 2626 positive cases have been reported in the state so far. While the death toll has reached 112. A total of 179 patients in the state have recovered and returned home.At present about 3 thousand tests are done every day in the state: Jayanti RaviJayanti Ravi, the frontline health secretary, also gave information about the tests being conducted in the state today. He said around 3,000 tests are being conducted in the state at present. 750 tests were performed on 5 April. Which today more than 3 thousand are tested every day. As many as 4,212 tests were conducted on April 20. Testing is also being done in smaller districts along with enhancing the testing process in the hotspot area.