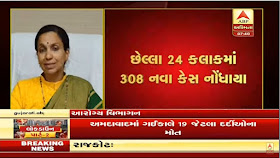 Ahmedabad. The number of cases during lockdown-2 in Gujarat has increased by 500 per cent. 12 new positive cases have been reported in Anand. Three more positive cases have been reported in Rajkot's Jungleshwar and two in Bhavnagar. So far a total of 3791 patients have been registered and 434 patients have been discharged while the death toll has reached 181. After a long struggle, the Gujarat government has finally stopped testing with the Rapid Kit. The use of Rapid Test Kit has been discontinued after testing 8900 in the state. Most of the patients tested negative from the kit ordered from China. The central government had decided to stop the testing due to inconclusive results. It is to be noted that in many districts of Gujarat, tests have been done with Rapid Kit and those districts were declared Corona Free. This has left the government and the health department in a quandary.If there is more than one person on a two wheeler and more than two people in the car, the vehicle will be impounded

State police chief Shivanand Jai said it was important to reduce contact between people. The only person on a two wheeler should get out if needed. Sitting in a car with more than two people can cause a transition. If there is more than one person in the two wheeler and more than two people in the car, the vehicle will be confiscated. People in the green zone area also need to be vigilant. Concessions may be revoked as part of precaution where the transition is high. As well as action will be taken where social distance is not maintained. Shops other than essential items were allowed to open in Panchmahal, but a strict lockdown has been ordered in Panchmahal where social distance is not maintained and an SRP team has been dispatched.Tuwer will be procured by the government, from May 1 to May 5: Ashwini KumarThe water situation in the state was discussed by the Chief Minister. In which the state has been asked to plan in such a way that drinking water problem does not arise. Responsibility for this has been assigned to the District Collector. Chief Minister's Secretary Ashwini Kumar also said that all head pumps should be repaired immediately. He further said that the purchase of Tuvar will be initiated by the government. The government will buy tuwer from May 1 to May 5. For this, registration has been done by the farmers from 1st December to 31st January. In addition, the remaining 12 thousand farmers will also benefit. Chickpeas and rye will be procured by Gujcomasol.Six cities in the state were declared red zonesRajkot, Ahmedabad, Surat, Vadodara, Patan and Bhavnagar have been declared as red zones. Also, CM Rupani has called a meeting of ministers to discuss the opening of the lockdown on May 3.19 killed in Ahmedabad on 28 AprilOf the 19 patients reported dead in the state yesterday, all died in Ahmedabad. Of the 19 deaths, 4 patients died primarily from corona while 15 patients died from other illnesses, high risk and corona. As many as 40 more patients recovered on April 28.Total patient death 3774, 181 deaths and 434 discharges (according to figures released by the government every 24 hours)IMPORTANT LINK::: DOWNLOAD OFFICIAL PRESS NOTE FROM
Gujarat Corona update date 29-4-2020 2020-04-29T07:59:00-07:00 Rating: 4.5 Diposkan Oleh: Niya 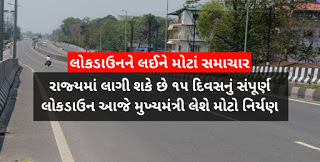