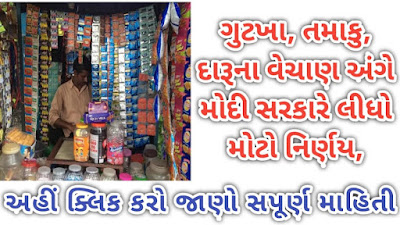 In addition to this, all employees should use thermal screening and sanitizer during their over-fever. It has been said to keep distance even at lunchtime. The guidelines say that all types of flights, except cargo, will be completely closed. In this way, all public transport services have also been banned. Auto rickshaws, taxi and cab services will also be closed.
Guidelines have also been ordered to block social groups. Religious venues have also been banned from any planning or ceremony. Excluding medical emergencies, people have been banned from moving from one district to another.
ગુજરાતીમાં માહીતી માટે અહિં ક્લિક કરો.
Modi government makes big decision on sale of Gutkha, tobacco, alcohol, Learn details 2020-04-15T22:43:00-07:00 Rating: 4.5 Diposkan Oleh: Niya