Revision of interest rates for Small Saving Schemes
Rate of interest from 1/1/2020 to 31/3/2020
Rate of interest from 1/4/2020 to 30/6/2020Saving is income not spent, or deferred consumption. Methods of saving include putting money aside in, for example, a deposit account, a pension account, an investment fund, or as cash. Saving also involves reducing expenditures, such as recurring costs. In terms of personal finance, saving generally specifies low-risk preservation of money, as in a deposit account, versus investment, wherein risk is a lot higher; in economics more broadly, it refers to any income not used for immediate consumption. Saving does not automatically include interest.
In exercise of the powers conferred by rule9-1 of the Government Saving Promotion General Rules,2018, the rates of interest on various Small Saving Schemes for the first querter of financial year 2020-21 starting from 1st April,2020 and ending on June,2020 have been revised as indicated below. 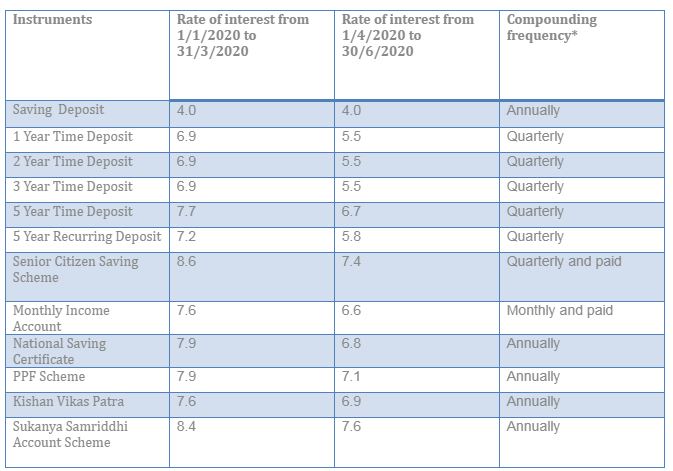 A deposit account is a savings account, current account or any other type of bank account that allows money to be deposited and withdrawn by the account holder. These transactions are recorded on the bank's books, and the resulting balance is recorded as a liability for the bank and represents the amount owed by the bank to the customer. Some banks may charge a fee for this service, while others may pay the customer interest on the funds deposited.
National Savings Certificate
National Savings Certificates, popularly known as NSC, is an Indian Government Savings Bond, primarily used for small savings and income tax saving investments in India. It is part of the postal savings system of Indian Postal Service (India Post).(Bhartiya Daak) These can be purchased from any Post Office in India by an adult (either in his/her own name or on behalf of a minor), a minor, a trust, and two adults jointly. These are issued for five and ten year maturity and can be pledged to banks as collateral for availing loans. The holder gets the tax benefit under Section 80C of Income Tax Act, 1961. 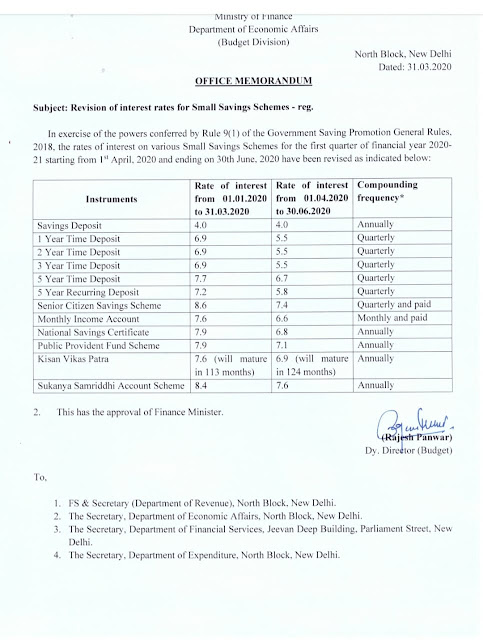 Interest Rates of Small Saving Schemes
The Public Provident FundThe Public Provident Fund is a savings-cum-tax-saving instrument in India, introduced by the National Savings Institute of the Ministry of Finance in 1968. The aim of the scheme is to mobilize small savings by offering an investment with reasonable returns combined with income tax benefits.The scheme is fully guaranteed by the Central Government. Balance in PPF account is not subject to attachment under any order or decree of court. However, Income Tax & other Government authorities can attach the account for recovering tax dues.
Sukanya Samriddhi AccountSukanya Samriddhi Account (Girl Child Prosperity Account) is a Government of India backed saving scheme targeted at the parents of girl children. The scheme encourages parents to build a fund for the future education and marriage expenses for their female child.The scheme was launched by Prime Minister Narendra Modi on 22 January 2015 as a part of the Beti Bachao, Beti Padhao campaign.
Kisan Vikas Patra
Kisan Vikas Patra is a saving certificate scheme which was first launched in 1988 by India Post. It was successful in the early months but afterwards the Government of India set up a committee under supervision of Shyamala Gopinath which gave its recommendation to the Government that KVP could be misused. Hence the Government of India decided to close this scheme and KVP was closed in 2011 and the new government re-launched it in 2014.
Revision of interest rates for Small Saving Schemes 2020-04-01T00:50:00-07:00 Rating: 4.5 Diposkan Oleh: Niya 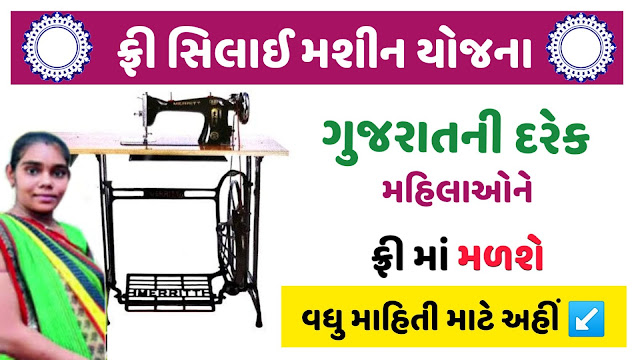