Even bank branches will not open, ATMs will continue
Groceries, vegetables, fruits will not be available in the shutdown, petrol pump will be open
Gandhinagar. The state has reported 388 positive cases of corona in the last 24 hours and 29 patients have died while 209 patients have been discharged. With this so far 7013 patients have been reported and the death toll has risen to 425. As many as 1709 patients have recovered and returned home so far. While in the press note of the health and family welfare department, a patient from Rajasthan has also been shown. 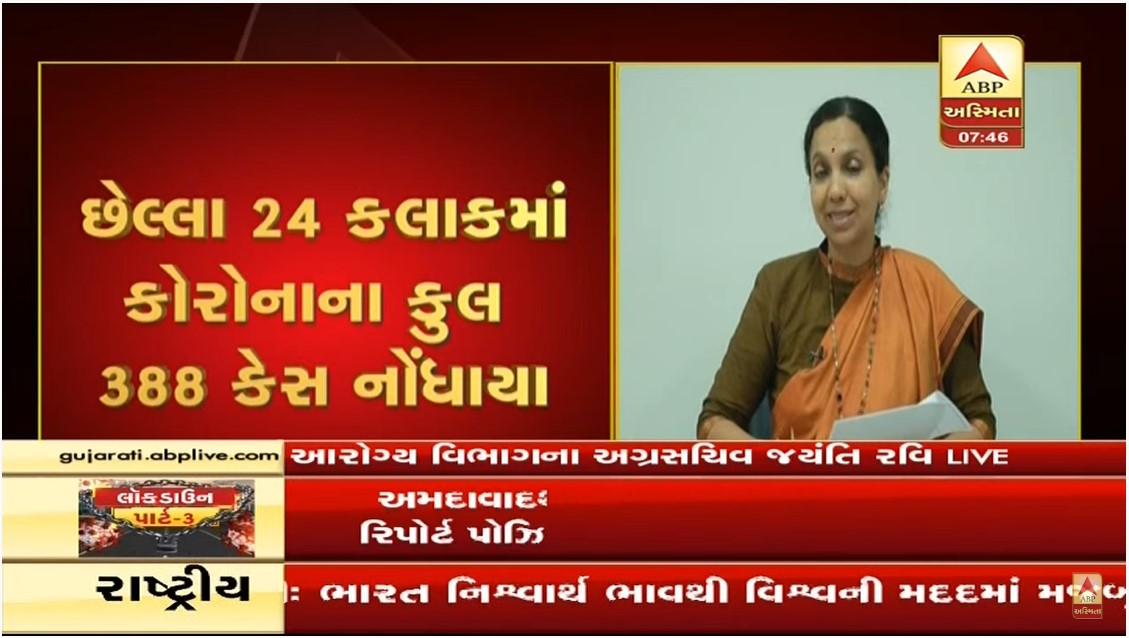 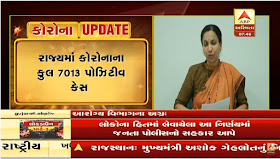 A joint briefing on Korona will be given by Additional Chief Secretary of Revenue Pankaj Kumar and Principal Secretary of Health Jayanti Ravi.


Important events since the morning of May 7th

Chief Minister's Secretary Ashwini Kumar said 29,540 people have been repatriated from various states so far. Of these, 15,523 have been repatriated from Maharashtra, 4,252 from Rajasthan, 1,412 from UP, 1,590 from Madhya Pradesh, 1,138 from Karnataka and 604 from Tamil Nadu. As many as 80,400 workers have been sent to their hometowns by 67 trains from the state till yesterday to deliver them to their home states. They have been sent from UP, Bihar, Jharkhand and Odisha. Today, the state government is preparing to send 34 more trains to people from UP, Bihar, Jharkhand, Odisha, Madhya Pradesh and Chhattisgarh. 20 trains from UP, 5 trains from Odisha, 4 trains from Bihar, 2 trains from Jharkhand, 2 trains from Madhya Pradesh and 1 train from Chhattisgarh will leave from different cities of the state. Out of which 12 trains will leave from Surat, 3-3 from Ahmedabad and Viramgam, 2 from Rajkot, 3 from Morbi, 3 from Vadodara, 2 from Jamnagar, Nadiad, Junagadh, Mehsana, Palanpur, Bharuch and Godhra. People from Gujarat who were trapped in various states have been brought back.

Police sent 50 people to Rajasthan in luxury buses selling seasonal items on the sidewalk
The plight of foreigners trapped in the lockdown following the corona virus has become pitiable. Police have sent around 50 pedestrians in a luxury bus to their home state of Rajasthan to make a living by selling seasonal items including balloons, toys and mosquito rackets on the roads of Vadodara city.

Order to start practice of private doctors in the state

Currently, many private doctors are not practicing in Gujarat and especially in big cities where more cases of coronavirus are placed in the red zone. On behalf of the Gujarat government, Health Minister and Deputy Chief Minister Nitin Patel has issued a jog order to all doctors, saying that the licenses of private hospitals and doctors who do not start their services from Thursday will be revoked. In addition, Nitin Patel visited the Civil Hospital on Wednesday and appealed to the experts here to come forward to provide services or guidance. He appealed to specialist doctors to come to the side of the government as the death rate of patients in civil hospitals is currently high.

Cases have dropped but tests have not
The most striking thing is that on Wednesday, the number of cases has decreased but the number of tests against it has increased. Therefore, there is no reason to reduce the number of cases. On the contrary, 5,559 samples were tested on Wednesday against a total of 4,984 tests conducted on Tuesday. So far a total of 95,191 tests have been conducted in Gujarat out of which 6,625 have been positive and 88,566 have been negative. A shutdown has been declared in all the municipal areas of Ahmedabad following the increasing prevalence of corona. So from Thursday all the shops except milk-medicine will be closed till 15th May. Following Ahmedabad, the sale of vegetables has also been banned in Surat and Nadiad from Friday. In Gandhinagar district, 5 positive cases of corona have come up. Of these, 3 cases have been reported in Dahegam, 1 in Kalol and 1 in Vavol. Crowds of people wanting to go home have been seen in Surat.