The lockdown in Gujarat will be lightened from 18th, schools and colleges may open in the second week of JuneA blueprint has been prepared to open a lockdown in Gujarat between Corona and Kaher. In which the plan has been prepared as per the guideline of the center. For which the Gujarat government has received reports from high officials of cities and districts. Based on which the release will be started in two days. Consideration is also being given to start a school college, especially with industry and business, in which schools may be ordered to open in the second week of June and all students to wear mandatory masks. 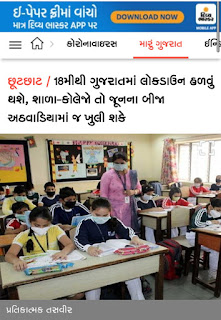 The education department is active, strict rules are being made including compulsory masks in school collegesBusinesses can be opened in all city-districts except the state's containment zonesThe lockdown will open in Ahmedabad from May 15 in the Red, Orange and Green zones with different types of specific restrictions and relaxation. Shops may be open for several hours in the Red and Orange zones. Some other businesses, including vegetables and groceries, may also be exempt. Thus, in the red zone of Gujarat, the lock down is being considered for a specific hour only. The state's main urban markets will be open from 9 a.m. to 5 p.m., but traders and consumers will have to adhere to the Corona guideline.SCHOOL COLLEGE JUNA NA SECOND WEEK MA KHULI SAKE BABAT NEWS IN GUJARATI