Schools can open after July 15, 50% students can come in 1 day Rotation policy.

Schools can open after July 15, 50% students can come in 1 day Rotation policy. 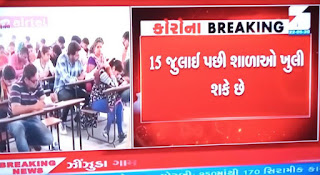 Ahmedabad.  After 55 days of strict adherence to the lockdown in the state, Corona's care has remained the same but the state government has given massive concessions.  Then there is Ajampo with relief in the minds of the people.  Divya Bhaskar received questions from readers across the state that he wanted to ask the state government.  Chintan Acharya of Divya Bhaskar asked these questions of the readers to the Chief Minister of the state Vijay Rupani.  Find out the answers given by Rupani to the questions of the readers ... 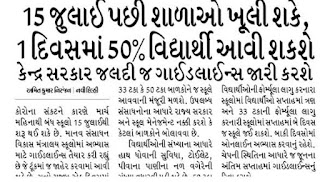 Schools can open after July 15, 50% students can come in 1 day Rotation policy.
On the issue of lockdowns and concessions, Chief Minister Vijay Rupani answered important questions of the present time.  He gave a clear indication that the concessions could be withdrawn if the number of cases increased and people did not comply with social discrimination.  At the same time, Rupani said that adequate arrangements would be made by the government in the coming days to bring back the repatriated workers.  He also presented the reasons behind the rising cases in the state.

Question: In the last 10 days alone, 4,368 cases have been registered in the state, even though the situation is so bad.

Rupani: Lockdown is a compulsion, not concessions.  It is a compulsion for the government to keep the city or state areas closed.  We know that we have taken this calculated risk where the transition is not high so you can say a combination of strategy and risk.  Discussed with representatives of the Chamber of Commerce, Cabinet, officials, health officials.  Surviving Corona is about living life and moving on.
Question: In 53 days of lockdown, the number of cases had crossed 10 thousand.

Schools can open after July 15, 50% students can come in 1 day Rotation policy.
Rupani: Not only Gujarat but also Maharashtra or Tamil Nadu and Gujarat has more cases.  We have already said that the situation was under control but the people of the Tablighi Jamaat of Nizamuddin Markaz hid their travel history and the cases in Ahmedabad and Surat increased dramatically.  The graph of statistics for the last fortnight is almost stable and now it is hoped that it will go down.  Earlier the cases were increased due to super spreaders in the cities.

Question: 619 deaths have been reported in Ahmedabad so far, what is the reason behind the highest number of deaths in civil hospitals?
Rupani: First, there is no significant difference between the number of deaths in civil hospitals during March, April and May 2019 and the number of deaths during the same months this year.  We haven't hidden the numbers already so it looks like a big figure.  The director of AIIMS, Dr.  Randeep Guleria said the death toll was higher as patients were coming at the last minute.  We pay attention to the treatment.
Question: More than 250 cases have been reported daily in Ahmedabad in the last few days. Will the lockdown concession end if the number of cases increases?
Rupani: It is already clear that the containment zone will be applied in the areas where the number of cases increases and similarly if the number of cases decreases then the area outside the containment zone will also be applied.  Not only that, even if social distance is not maintained, we will withdraw the concessions from those areas.  Exemption is subject to compliance with the rules so that cases do not escalate and public life is restored.  Strict action should be taken against the violator.
Question: More than 9 lakh workers have left Gujarat by train in the last few days, what will you do to bring back the tourists who have left Gujarat?
Rupani: We sent the workers for that, they had a strong feeling of going home.  People walked thousands of kilometers.  So far 9 lakh, yesterday 71 trains dispatched 1.10 lakh laborers.  They need a job and they have to come back.  We will arrange.  It will take fifteen days or a month for everything to fall apart but they will come back.
Question: There is fear among the people after seeing the statistics, what is the government doing?


Rupani: CCTV cameras are installed inside every ward in the Civil Hospital and I watch its activities live from the dashboard.  We keep an eye on the whole situation.  You see, the recovery rate in Gujarat has increased a lot and 42% of the total positives have recovered.  We have also set up a private hospital at present.  So that even if the number of patients increases, they can still get treatment.
Question: What do you do for the construction sector?  Will there be tax benefits?
Rupani: The Centre's package of Rs 20 lakh crore is a long-term idea.  Money liquidity is seen to be maintained in the markets.  The liquidity of money is maintained in the market and every sector benefits from it.  The law has also announced many concessions.  So any field will benefit.  Money has been given in MNREGA so even small class people will get money in hand and if their purchasing power increases then that money will come in the market and all classes will benefit from it and the government will still make arrangements for Sahu.

Question: Have you taken the opinion of experts to keep the lockdown mild?
Rupani: Businesses were allowed to start employment in the areas of Red Zone.  But there has not been a big increase in cases.  Cities that were closed also have more positive cases but have not given more concessions even during this lockdown phase.  As in the western and eastern part of Ahmedabad, we have gradually made everything open by taking strategic decisions.
Schools can open after July 15, 50% students can come in 1 day Rotation policy. 2020-05-21T22:49:00-07:00 Rating: 4.5 Diposkan Oleh: Niya