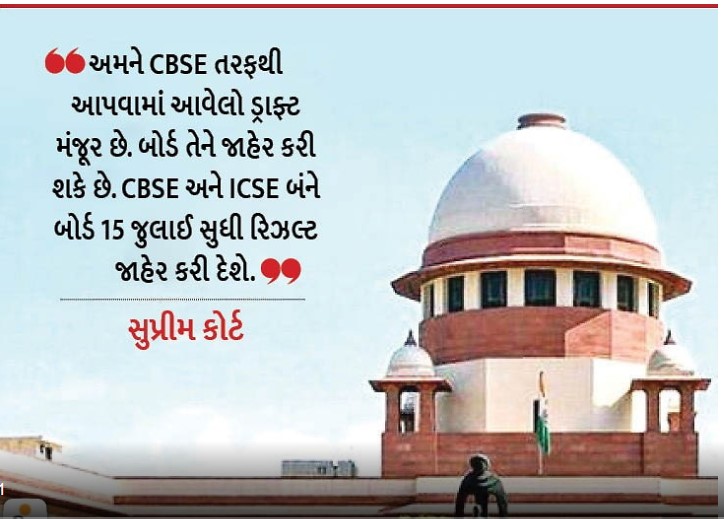 A three-judge bench comprising Justices AM Khanwilkar, Dinesh Maheshwari and Sanjeev Khanna also disposed of each case pending in another court.
Results By July 15, optional exams depend on children
ICSE and CBSE told the court that the results of Std.10 and Std.12 would be released by July 15. Solicitor General Tushar Mehta from CBSE and Central Government was present in the court. He said that the assessment scheme would be based on the marks of the three previous examinations of the student.
The CBSE board told the apex court that alternative examinations would be conducted by the CBSE to improve the performance of the students if they wished. The result of those students will also be declared along with the result of other students.
ICSE said- our and CBSE's affidavit is the same
Regarding the rest of the ICSE exams, the board told the court that we can also give the option to students of Std. 10 to take the exam later. The board also said that the 'average mark' formula is different from CBSE. "I have read the CBSE affidavit and ours is the same," said Jaideep Gupta, counsel for the board.
On Thursday, the draft to cancel the exam was presented
The CBSE had decided to cancel the remaining papers in Std.10 and Std.12 examinations due to increasing cases of Corona transition. During a hearing in the Supreme Court on Thursday, the board told the government that now Std. 12 students will be assessed on the basis of their three exams. Later they will also be able to give the paper.
Key 7 points of the draft given to the Supreme Court by the CBSE Board
1. All the examinations of Std.10 and Std.12 students scheduled between 1st to 15th July have been canceled.
2. After the cancellation of the examination, the result of Std.10 and Std.12 will be released on the basis of the assessment scheme shown by the Competent Committee of CBSE.
3. The result prepared by the assessment scheme will be declared by 15th July 2020, on the basis of which students will be able to apply for admission in higher educational institutions at home and abroad.
4. Optional examination will also be organized for the students to take the paper between 1st to 15th July after the conditions become normal. Students who are not happy with the result of the assessment scheme can participate in this examination. In this case, the marks obtained in the optional examination will be considered as final.
5. No other examination will be held for standard 10 students. Their result will be decided on the basis of CBSE assessment scheme.
6. Std. If the students of class 12 do not appear in the optional examination, their result will also be deducted based on the marking scheme of CBSE.
7. New Assessment Scheme of CBSE:
(a) Students of Std.10 and Std.12 who have completed all their examinations, their result will be declared on the basis of their performance.
(b) Out of all the students who have given papers in more than three subjects in the examination, the marks of the best performing subjects in three subjects will be given in the subject for which the examination is pending.
(c) For students who have appeared in only three papers, marks will be given in the remaining subject keeping in view the good performance of two subjects.
(d) Std. There are very few students in 12th who have appeared for only one or two subjects. Their result will be announced based on the performance of internal, practical, project assessment.
READ DIVYBHAKSAR GUJARATI NEWS REPORT
CBSE BOARD OFFICIAL WEBSITE
CBSE RESULT 2020 NEWS REPORT 2020-06-26T04:35:00-07:00 Rating: 4.5 Diposkan Oleh: Niya