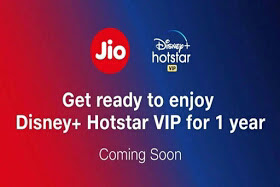 
Another move to counter Airtel?

The move by Reliance Jio is likely to add more competition against the telco's rival Airtel. Both Jio and Airtel have their own live TV services - JioTV and Airtel Xstream - offering a lot of exclusive and English content already. A renewed effort of Jio to lure more customers will hamper Airtel's kitty of services that would not have enough for customers.
Jio to Offer 1 Year of Free Disney+ Hotstar VIP Subscription for Its Customers 2020-06-05T18:04:00-07:00 Rating: 4.5 Diposkan Oleh: Niya