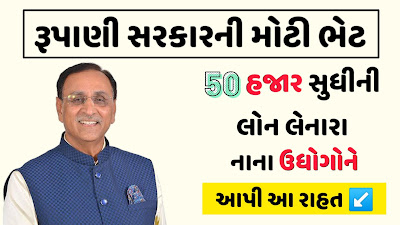 Rupani government's big Gift
After the Gujarat government slowly pulled the state out of the Corona transition, Rs.  Businesses or start-ups that take loans up to Rs 50,000 have been exempted from paying stamp duty till October 31.  This decision of Gujarat Government will benefit 25000 small units of Gujarat.  In addition, under the Prime Minister's Street Vendors Self-Reliance Fund Scheme, Rs.  Two lakh street vendors with working capital of up to Rs.  It has been decided to waive stamp duty of Rs 6 crore

To re-thrive small businesses
Rs.  Chief Minister Vijay Rupani has decided to measure stamp duty of Rs 7.75 crore.  The decision has been made to revitalize small businesses affected by the Corona epidemic
● The government decided to exempt from stamp duty
Under the scheme to benefit small traders, the Prime Minister's Street Vendors Self-Reliant Money Scheme has provided Rs.  The government has also decided to exempt about two lakh beneficiaries who have availed working capital loans of Rs 10,000 from stamp duty.  Rs.  A stamp duty of Rs.300 has to be deposited for a capital loan of Rs.10,000
📜To read in Gujarati 📜
● 7.75 crore
As the Corona transition has had a significant impact on business, small businesses and start-ups have been given loans of up to Rs 50,000 and street ferrymen to earn a living on loans taken under the Prime Minister's Street Vendors Self-Help Fund.  7.75 crore has been decided
Rupani government's big Gift | Full Details Open 2010 2020-08-24T03:15:00-07:00 Rating: 4.5 Diposkan Oleh: Niya

Khedut Sahay package 3700 crore The historic five-day monsoon session of the Gujarat Legislative Assembly has begun. The legislature saw a...