Prime Minister Narendra Modi today announced the names of the cleanest cities in the country in an online program. Indore has come first in all the three quarters of the Sanitation Survey 2020 League. It has announced the results for the first quarter in January and the second and third quarters today. Thus the results of the three quarters have been declared. In the whole country, Surat is in the second place while Ahmedabad is in the 5th place, Rajkot is in the 6th place and Vadodara is in the 10th place. While in the year 2019, Ahmedabad was ranked 6th, Rajkot was ranked 9th, Surat was ranked 14th and Vadodara was ranked 79th. Thus Ahmedabad has jumped one rank, Surat 12 ranks, Rajkot 3 ranks while Vadodara has jumped 69 ranks to reach the top 10.

Gandhinagar ranks 8th out of less than 10 lakh populationGandhinagar, the capital of Gujarat, is ranked 8th among the top 10 cities with a population of 1 to 10 lakh with a score of 5056.72 as per the list released by the Sanitation Survey 2020. In 2019, it was ranked 22nd with a score of 3757. In this category, Jamnagar is ranked 27th which was ranked 80th last year.The Chief Minister congratulated the four citiesIn this regard, Chief Minister Vijay Rupani said that Gujarat is proud of the results of the Government of India's Clean Urban Survey 2020. He has congratulated 4 metros of Gujarat for getting a place in the top 10 metros of the country. The Chief Minister lauded the fact that four cities of the state - Surat, Ahmedabad, Rajkot and Vadodara - have been ranked second, fifth, sixth and tenth in the hygiene survey, even during the difficult times of Corona.The people of Gujarat accepted the appeal of both the grandsons of Gujarat: Chief Minister Rupani 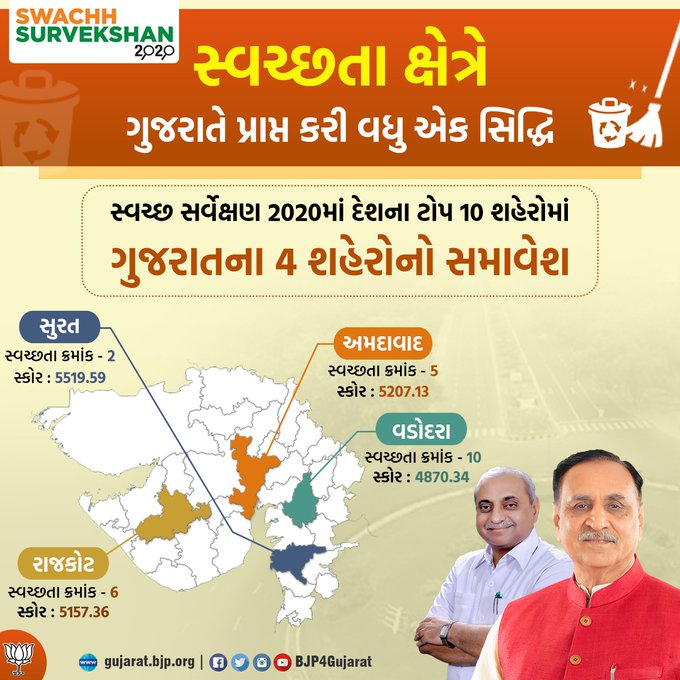 The mayor of Rajkot and the mayor thanked the cleanersRajkot ranks sixth in the country in sanitation survey. Earlier, Rajkot was ranked 9th. But this time it came in sixth. In this regard, Rajkot Manpa Commissioner Udit Agarwal and Mayor Binaben Acharya said, "We thank the people of Rajkot and the cleaners." The kind of work that will be done in the top 3 in the near future.