Home / NATIONAL NEWS / The state government is committed to protecting the interests of farmers and legitimate landowners by controlling land mafias.

The state government is committed to protecting the interests of farmers and legitimate landowners by controlling land mafias.

The state government is committed to protecting the interests of farmers and legitimate landowners by controlling land mafias. 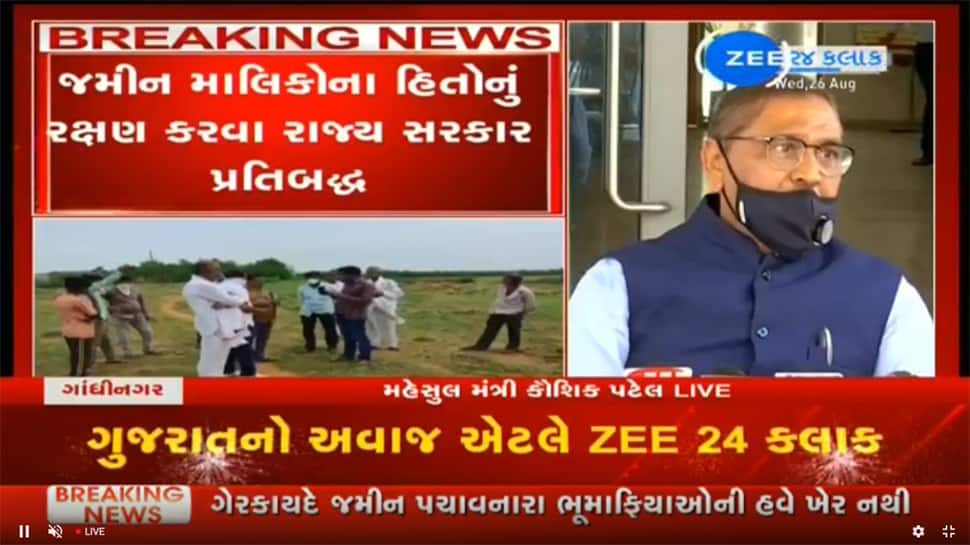 Special court to set up special court to convict land mafias through speedy-transparent case investigation-State govt.
The case will be disposed of within six months of the case being filed in the court.
Land grabbers will be jailed for 10 to 15 years - a penalty equal to the jantri value of the land.
Land Grabber will be responsible for the burden of proof.
Crimes under this Act will be investigated by a police officer who is not below the rank of Deputy Superintendent of Police.
Chief Minister Shri Vijaybhai Rupani has decided to pass a strict act-bill to crack down on land mafia elements illegally occupying land owned by government, local self-governing bodies or public trust-monasteries, farmers or private persons in Gujarat.

The Chief Minister is scheduled to present a proposal in this regard in the state cabinet meeting to be held tomorrow, Wednesday.

Gujarat has become the best choice for investment and land of opportunity for investors, industries, trade and employment from all over the world as a leading state of the country which is benefiting from global development.

The overall development of Gujarat in the last two decades has resulted in a significant increase in economic, social and commercial and agricultural activities in the state. At the same time, due to the speed of all these activities, the demand for land to build the required structure is gradually increasing.


Some of the important provisions of the Gujarat Land Grabbing (Prohibition) Act Ordinance are as follows: -
Lands owned by the state government or local bodies by force, criminal intimidation or fraud by some elements involved in the sale of land as well as individuals with vested interests taking advantage of the situation and engaging in illegal activities with the intention of making money overnight. They have been involved in illegal activities by forging documents, illegal possession without any direct possession or ownership and in some cases colluding with the administration, confiscating such land, transferring it in the name of others, selling it and renting it out.

The state government has also received complaints from time to time about illegal activities ranging from confiscating the land of Dhartiputras as well as religious institutions and constructing and selling it.

Even in individual cases, many people in the state have fallen prey to such elements. This sometimes raises law and order issues for the state government. Land grabbing in any form under those circumstances is prohibited by this Act. And declared such activity illegal.

The law provides that not only lands owned by government or local authorities but also persons involved in activities such as religious charities or donations or private tenants who have no legal tenants and continue to occupy the land will be found guilty under the Act and will be convicted for at least ten years. And imprisonment for a maximum of fourteen years as well as a fine up to the jantri value of the property.

Crimes under this Act will be investigated only by a police officer who is not below the rank of Deputy Superintendent of Police.

The implementation of this Act in the State will pave the way for drastic punishment and punitive action against the illegal or intimidating, intimidating elements occupying the lands of farmers, common man or private ownership, public institution, government, local self-government.

Thus, when the provisions of the ordinance come into force, the land can be confiscated and sold or the law can be enacted to encourage such activity so that the people can enjoy the rights of land ownership without any worries. In addition, farmers, religious, social trusts, public trusts, institutions, etc. involved in the activity of this law will be facilitated in their administration.

The Chief Minister has developed maximum use of technology and face lash systems for simplification of revenue services in the state.


READ NEWS REPORT FROM HERE
Recently, the state government has radically amended the law on land purchase to facilitate the sale and purchase of lands for agriculture, animal husbandry, health and engineering education as well as bona fide industrial purposes to make the people realize transparency and decisiveness.
The state government is committed to protecting the interests of farmers and legitimate landowners by controlling land mafias. 2020-08-27T02:40:00-07:00 Rating: 4.5 Diposkan Oleh: Niya