Home / EDUCATION NEWS / When will the school open ! some start want school to open September not all that,s all you needs to knows Divyabhaskar News

When will the school open ! some start want school to open September not all that,s all you needs to knows Divyabhaskar News

When will the school open ! some start want school to open September  not all that,s all you needs to knows Divyabhaskar News 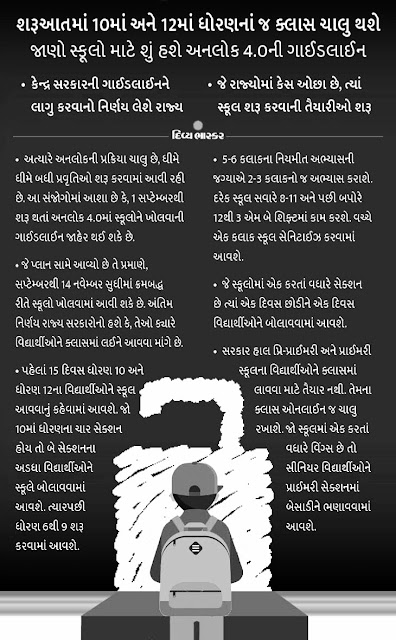 India to adopt Switzerland model, school opening guideline to be implemented with partial changes
States like Haryana, Assam, Andhra Pradesh, West Bengal, Goa want schools to open in September, the current government in Delhi is not ready
Outbreaks of the corona virus have had a devastating effect on the study this time around. Schools and colleges have been closed since the first lockdown in March. Exams could not even be held in many states. The new semester has started and online studies have also started in many schools like New Normal. Ever since the Narendra Modi government started the process of unlocking, the question that has been repeatedly asked is, when will the schools start? So let's find out what preparations are being made to reopen schools and what guidelines the government can come up with to reopen schools in Unlock 4.0.

What is the plan of the Central Government?
The Central Government's School Education Department conducted a survey of parents in July. Most parents say they are not ready to send their children to school right now.
Some states, however, say that students' studies are being adversely affected. They do not have any facility like laptop or internet for online study.
The secretaries attached to the group of ministers headed by Health Minister Harshvardhan have come up with a plan for Covid-19 management. It will include what activities will start after August 31 in Unlock 4.0.
Speaking of the Switzerland model, what is this model

The Secretoma Group has spoken of adopting the Switzerland model. It has been slightly modified. Switzerland opened the school on May 11. The study continued in the schools till July.
The standards were divided into two groups. Every day one group would come to class and the other group would study from home. After the second week, all children under the age of 16 were asked to come to school every day.
Meanwhile, on June 8, a small number of older children were called to school. Some students decided to study at home and were approved by the school.
The Swiss government did not force children under the age of 16 into social discrimination. Older children observed a distance of 6 feet.
Masks were not mandatory for children, but in some states masks were made mandatory for older children. Masks were also made mandatory for the teachers who taught them.
The Swiss government also allowed schools to make and enforce rules in their own way. Schools placed children of different years in different groups. Their timings were also kept separate, so as not to form large groups.
Which states are ready to open schools from September?

Haryana was ready to open the school in August, but now the schools will open here from September. A survey was conducted here in which 30 per cent parents demanded to open a school.
Assam has made it clear that they will decide when to open the school after August 25. Chief Minister Sarbananda Sonowal has said that they are thinking of opening the school from September 1.
Preparations are underway in Andhra and West Bengal to open schools on Teachers' Day on September 5. West Bengal Chief Minister Mamata Banerjee said the school would start functioning from September if the situation improves.
Schools may open in September in the northeastern states of Himachal Pradesh, Uttarakhand, Goa and other Union Territories, as well as Orissa, Tamil Nadu, Telangana and Kerala.
Delhi Chief Minister Arvind Kejriwal has made it clear that he is not ready to open the school at present. Schools will remain closed until the corona virus is completely controlled.
There is no rush to start schools in Madhya Pradesh, Chhattisgarh, Rajasthan, Jharkhand, Maharashtra, Gujarat, Bihar and Uttar Pradesh. These states will announce the guideline only after the central government's guideline comes.