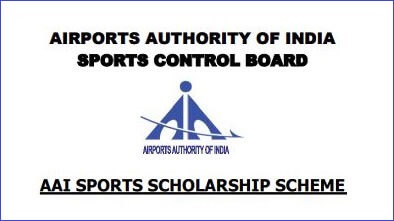 The objective of this scheme is to engage on contract outstanding young sportspersons in the Airports Authority of India (AAI) with a view to giving permanent employment to them subsequently based on their performances and vacancies available.2. AGE GROUPThe contract will be available to the sportspersons in the age group of over 14 years and under 24 years as on 31.03.2021.3. GAMES/CATEGORY/CRITERIAS.NO. GAME CATEGORY CRITERIA::1 Badminton Boys & Girls Players who have consistently played in the last two / three years and performed outstandingly in SubJunior/ Junior/ Senior National Championship, Sub-Junior/ Junior/ Senior International Events / Matches.2. Chess Boys & Girls3. Kho-kho Girls4. Table Tennis Boys & Girls5. Carrom Boys & Girls Note: No other games will be entertained.4 NUMBER OF PERSONS TO BE ENGAGED ON SPORTS CONTRACT The number of persons to be engaged on sports contract will be as per requirement.
AIRPORTS AUTHORITY OF INDIA SPORTS CONTROL BOARD ::2:: 5 AMOUNT OF SPORTS CONTRACTઆ પણ વાંચો:- વ્હાલી દિકરી યોજના માહિતી અને ફોર્મ6 FACILITIES TO CONTRACT PLAYERS FOR PARTICIPATION IN INDIVIDUAL CAPACITY IN NATIONAL/INTERNATIONAL RANKING TOURNAMENTS WITHIN THE COUNTRY AND INTERNATIONAL TOURNAMENTS OUTSIDE THE COUNTRY(i) To & fro expenditure from place of residence to venue of tournament (restricted to maximum second AC Rajdhani or Shatabdi rail fare) in respect of tournaments held within the country. For international tournaments outside the country, entries for which are routed through the concerned National Sports Federation, the entitlement will be restricted to Rs. 25,000/- in respect of to and fro trip or actual whichever is less on production of air ticket and boarding passes.(ii) Journey Allowance @ of Rs. 300/- for 12 to 24 hours and Rs. 150/- under 12 hours.(iii) Road Mileage Allowance @ Rs. 16/- per KM from place of residence to railway station/airport/bus stand and from railway station/airport/bus stand to residence.(iv) An amount of Rs. 1,200/- per day towards boarding & lodging (subject to actual which ever is less) for participation in tournaments in Metro Cities from one day before to one day after the tournament.(v) An amount of Rs. 1,000/- per day towards boarding & lodging (subject to actual which ever is less) for participation in tournaments in Non-Metro Cities from one day before to one day after the tournament.(vi) Reimbursement of amount in items (i) to (v) above is subject to overall ceiling of Rs. 50,000/- per financial year.(vii) Payment of an amount of Rs. 15,000/- per financial year towards procurement of sports equipments like rackets, bats, shoes etc., including repairing of equipments on production of bills. ::3:: 7 DURATION OF CONTRACT The contract will be applicable initially for one year and extendable based on the individual’s performance/improvement in his/her event subject to approval. The recipient of the contract will cease to get the contract once he/she attains the age of 25 years.8 CONDITIONS FOR AWARD OF CONTRACT(i) The contract sportsperson will not be entitled to draw any other financial assistance from any other source whatsoever for sporting activity nor will be entitled for any other employment or contract.(ii) There is no obligation on the part of the Airports Authority of India to give regular employment to the Contract Sportsperson.(iii) The contract sportsperson will abide by the rules, regulations and instructions of the AAI in force or those which may be laid down by a special or general order from time to time, especially with regard to the timing, place of practicing/playing, conduct, regular attendance for practice, reimbursement of expenses, etc. (iv) Apart from(iii) above, the contract sportsperson will be required to put in best efforts in playing, maintaining and upholding the image of AAI. (v) The contract can be terminated at 15 days’ notice or remuneration in lieu thereof by either side at any time before the expiry of the period of the contract.(vi) The contract sportsperson is required to assist the AAI Sports Control Board in all its training sessions, practice and actual matches on behalf of the Authority.(vii) The contract sportsperson is required to take prior permission in writing from the President/Secretary, AAI Sports Control Board or any other authorized officer of the AAI, if selected to represent in any other team other than the Authority.
Read Also :LPG, રાશન કાર્ડ અને આ વિવિધ સેવાઓના નિયમો(viii) The contract sportsperson is to obey all instructions given to him/her by the official Coach/Manager of the team, President/Secretary, AAI Sports Control Board or any authorized officer, who will be entitled to take such disciplinary action as may be deemed necessary in the event of any misconduct or any such act of insubordination both in and out of the field. The decision of the President, AAISCB in the event of any act of omission/misconduct shall be final. (ix) The contract sportsperson will not be entitled to avail the medical facilities of the AAI or any of the medical reimbursement except the medical allowance of Rs 1,000/- per month as mentioned above.x) The contract sportsperson shall be required to maintain strict discipline off and on the playground as is expected from any other member of the AAI team. In case the contract sportsperson has to leave the station of Administrative Control for personal work, he/she shall be required to take a written permission to do so from the President, AAISCB or any other authorized officer of AAI. (xi) For the purpose of the contract, the acts done by and/or order/directions issued by the Secretary, AAISCB or any other officer of AAI authorized shall be considered to be on behalf of the Authority.(xii) The engagement of the sportsperson is purely on contract for a specified period and the contract sportsperson will not be eligible for any other benefits which may be available to the employees of AAI including for becoming a member of the Provident Fund or any other schemes which may be in force from time to time.(xiii) The contract sportsperson will be solely responsible to comply with the provisions of the Income Tax Act for payment of Income tax, surcharge/TDS, etc. on the amount received from the Authority. The Authority, however shall deduct such TDS from, the amount so received as is necessitated by the Income Tax Act.

(xiv) The contract can be renewed at the sole discretion of AAI either in continuation of the contract or after such gap as is considered necessary on such terms & conditions as are intimated at the time of renewal.