Corona has had a major impact on the country's education.  The United Nations Educational, Scientific and Cultural Organization (UNESCO) has released a report.  According to which the education of about 32 crore students in India has been affected by the Corona epidemic which includes 15.81 crore girls and 16.25 crore boys.  Globally, the epidemic has affected the education of 157 crore students from 193 countries of the world, which is 91.3 percent of the students enrolled at various levels.  Discussing this major impact on education, many changes and challenges are being known.  This impact can become an integral part of our educational system in post-Corona times, the most important being that schools and colleges will have to invest in sustainable technical infrastructure after the corona epidemic and its ensuing lockdown.  In this, the training of teachers will be focused on the skills of working in a digital environment.  Examinations in higher educational institutions will be conducted online through traditional methods. 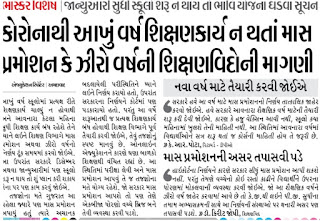 A study on the dimensions emerging in the field of education after the passing of Kovid-19 says that due to the Kovid-19 epidemic, more people are studying in digital medium and short duration courses are also popular.  Have been.  These changes are causing difficulty, but they are also giving examples of new ideas in the field of education.  It is clear from this that the effect of digital medium is going to be long lasting in the academic world.  Due to the pressure of Corona, the digital medium will be used more for studying in schools and colleges.  Use of apps and e-mail such as WhatsApp, zoom, team will be increased to achieve educational goals.  Academic institutes will develop such a structure in which teachers and students can read and study while remaining outside the academic campus.  Institutions will invest in such permanent technical infrastructure through which quality online education can be imparted.  It will also attract foreign investment.

Higher educational institutions will evaluate students through online rather than traditional methods of examination based on the methods being adopted in different countries.  The problems related to online education in the country have to be overcome.  The reach of Internet and information technology is very narrow.  Good speed internet availability is difficult for all in the country.  According to the National Sample Survey 2017-18 data, only 42 percent of urban and 15 percent of rural households have internet access.  If internet users are considered to be connected to internet once in a month, then only 34 percent of urban and 11 percent of rural people use internet.  The smartphone has not yet reached the hands of every student.  The Kovid-19 global epidemic has affected the decision of more than 48 percent of Indian students who wish to study abroad.  The report of a British company specializing in analyzing higher education institutions around the world and ranking these institutions has said that the benefit of investment in expensive studies abroad is reduced and employment after Kovid-19  Plans for students to study abroad have been affected due to reduced opportunities.

Today the number of people who reach the universities of India is very less.  The gross enrollment ratio in higher education is only 26 percent, which is lower than most countries.  This is a better opportunity for the educational institutions of the country, we have to further improve the level of academic quality in our country so that the students of the country are disillusioned with foreign studies.  Like an agile organization, our educational institutions should move on to the post corona opportunity and those involved in the education world must learn the most creative ways of the art of digital delivery, one of the implications of the corona epidemic is that the future of higher education institutions  There is expected to be a fundamental change in the way it operates.