Good News for Teachers and Students

Good News for Teachers and Students

Parents will be able to decide whether to send their children to school or not as per the government's plan to start schools from November 9 after Diwali. Students will be called to the school in turn, not more than 50 per cent together. Due to the Koro epidemic, the first phase of Std. Sources have said that 1st year schools will be started. However, along with high schools, schools will be started from November 9 and schools of Std. 6 to 8 will also be started in the primary section. This is because the upper primary and higher secondary schools, the teachers are saying that the decision has been made and the students are all three different.
Therefore, the Department of Education is fully prepared to start upper primary schools as well. Physical schools will start but have done. However, classes from Std. 1 to 8 will not be started till the condition of Corona is completely settled. They blame the schools for wanting to send their children to school, as per the rules of the education department. Is mandatory. But this year, the rule will be scrapped. According to 2 sources, the decision to send children to school will be followed by the decision of the teachers or parents to send the children to school. The students are coming that the school starts not only the principal but also the attendance in the school taken by the parents which is 30 on that day is welcome. But only a percentage will be given entry. Apart from this, students will also be kept in percentage. That is to say, if a student is infected, they have to be called to the school in turn, so it is not possible to blame them for sending the child to school or not. Will come. Suppose most should not be dumped, the decision can only be made by the guardian. Even if the parents are willing to send their children to school as part of the SOP's draft of school hygiene and starting schools, the sanitation system will have to be reduced to 50 per cent of the children on a mandatory day. Entry will be given. It is to be mentioned here that between the seating arrangements of the child, 3 students should be called at different times in 3 schools to hold a ceremony, gathering or consultation with the school administrators. A round of Karwa meeting is over. At the time of entry and exit of the school ૨ Meetings with different parents of each class are also required for attendance. Social weekly calendar has to be done online among the students with all the concerned people. A series of meetings is going on.
Important new link GOOD NEWS FOR TEACHERS 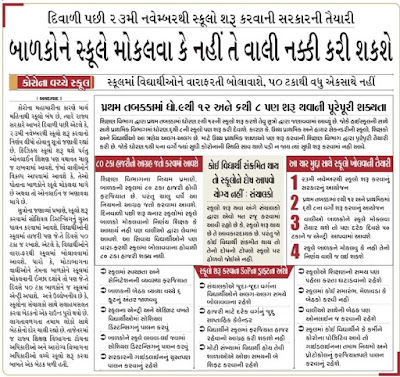 CLICK HERE TO READ SANDESH CLICK HERE
Compliance with recent distance  Compulsory attendance of students at school |No student or staff in the school can be urged to bring the top children of the state education department to school. If the corona is positive, to follow the social distance of the officers and the health department Strictness of the government's guideline to start schools between all the rules and regulations of the guideline which has a large number of students શાળા The schools had a meeting on compulsory adherence to the two short-term protocols. Will have to comply Shift will have to do.
Good News for Teachers and Students 2020-11-04T22:19:00-08:00 Rating: 4.5 Diposkan Oleh: Niya

Leave WhatsApp if you have privacy concerns: High Court advice 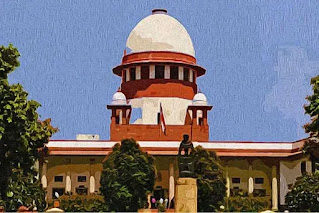