Corona epidemics are rampant, and everyone is waiting for a vaccine. The central government held an all-party meeting on the vaccine issue. The meeting was chaired by PM Modi via video conference. He said there was no need to wait for the corona vaccine, the vaccine would be ready in a few weeks. Following which, Aniruddhasinh Makwana, Ashish Modi, Jignesh Kotecha and Jitu Pandya of DivyaBhaskar have prepared an exclusive ground report on the four major cities of Gujarat, Ahmedabad, Vadodara, Surat and Rajkot. During this ground report, it has been officially learned that a list of more than 3 lakh 55 thousand people including 2.75 lakh people of Ahmedabad district has been prepared


Task Force has been formed at all 33 districts and 248 talukas and corporation level of the state for vaccination. Following this order, all the district collectors of the state, commissioners of the corporation and health officials have started preparations. A list of health workers, Corona Warriors, the elderly and people with co-morbidity is being prepared for all these officers. Gujarat officials have started working in coordination with the central team.

In rural Ahmedabad, a list of 2.75 lakh people including 7500 health workers was compiled


A meeting was held by the Ahmedabad District Collector regarding the vaccine. According to District Collector Sandeep Sagle, a list of 2.75 lakh people of Ahmedabad district has been prepared. According to which 2.75 lakh people will be vaccinated first. A list of 7500 healthcare workers has also been prepared. In which government and private healthcare workers are included in the list. A list of frontline warriors has been prepared. As well as being included in the list of frontline warriors who come into direct contact with people. 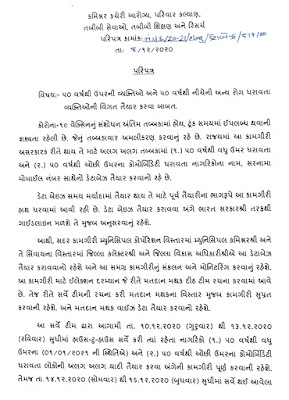 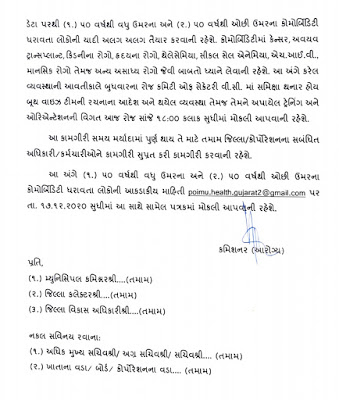 
The Ahmedabad Municipal Corporation had already started preparations for the corona vaccine. Regarding the distribution of the vaccine, a senior official of the corporation said in a conversation with DivyaBhsakar that the vaccine will be given in 4 stages. In which first the health workers will be vaccinated for which a list of about 40 thousand employees of Ahmedabad Municipal Corporation has been prepared and this list has been sent to the state government.

In the first phase, about 8500 doctors and health workers will be provided


A list of all doctors and health workers on duty at AMC has been started. The first dose will be given to about 8500 doctors and health workers. Created a co-win app for vaccines. When the vaccine arrives next week, first-line health workers fighting the Corona, Front Line Warriors, will be vaccinated on a priority basis. A list is being prepared for that. The vaccine will be given as per the guideline that will come by the government. A list of others will also be prepared in the coming days. Health Workers will be followed by Front Line Warriors, Solid Waste Management Department Sweepers, AMTS and BRTS Bus Employees and the third stage will be given to 50 year old Co-Morbid Individuals and later to the common man. 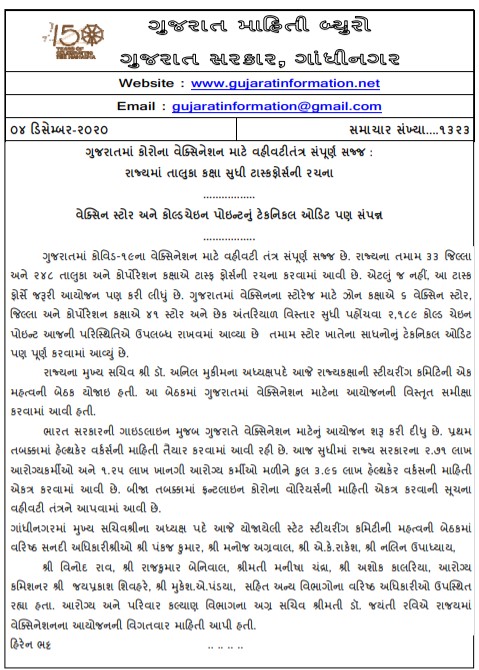 Surat: An exercise to prepare a database of teachers, cleaners and health workers

Speaking about the city of Surat, Surat Manpa Health Officer Pradeep Umrigar said that the vaccine is coming against us as part of the fight against the Corona epidemic. Which has been prepared as per the instruction received by the State Government. Not only that but the municipal commissioner has also met the officials twice in this regard. The emphasis is mainly on creating a useful data base. The first health worker is compiling a list of government hospitals, Manpa-run hospitals, 55 urban health centers, servant workers, teachers, other cleaners and all those involved in the operation. 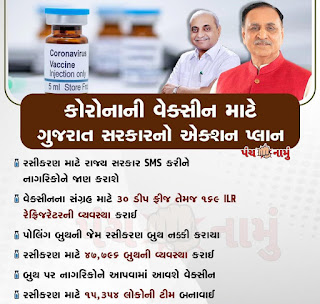 Data base operations at 62 government and 1000 private spaces


He further said that a database is being prepared at 62 government and 1000 private places. In which all the information including name, age is being collected. Also, the commissioner has suggested to prepare a list of all the people above 50 years living in Surat. Whose operations have begun.

Speaking of the second round, the vaccine corporation is training health workers, sanitary inspectors, nursing staff, multiple health workers, as well as nursing and medical college students to be used as vaccinators.


Regarding the maintenance of the vaccine, Pradeep Umrigar said that all the equipment is being collected to maintain the temperature of the vaccine from production to dosing. It is also instructed to arrange a generator for power backup so that all these equipments can be kept running for 24 hours.