Home / NATIONAL NEWS / Entry of one more variant of Corona in India! Terrible monster without symptoms

Entry of one more variant of Corona in India! Terrible monster without symptoms

Entry of one more variant of Corona in India! Terrible monster without symptoms


After Alpha, Beta, Gamma and Delta, another new variant of Corona has entered India. The virus causes the patient to lose weight in just 7 days. This variant of the virus was first found in Brazil but it was confirmed that only one variant came to India from there. Now, according to the clarification made by the scientists, not 1 but 2 variants have come to India from Brazil and this second variant B.1.1.28.2 is spreading very fast. 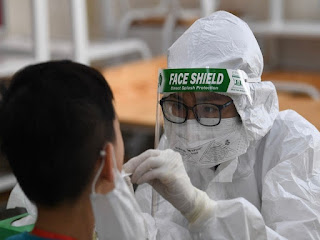 According to the results of a test performed on a Syrian hamster (a species of rat), this variant can be identified within 7 days of infection. This variant can reduce body weight very quickly and like Delta it can also reduce more severe and antibody capacity.


Dr. of the National Institute of Virology at Pune. Pragya Yadav said that B.1.1.28.2 variant was found from 2 people who came from outside. It was also tested after genome sequencing so that its effect could be reported. So far no more cases have been reported in India while most cases of Delta variant are coming up. It lowers the level of antibodies so that the risk of re-infection increases so it is very important to be vigilant. Such a virus could be responsible for a third wave.


According to the report, 2 people had no symptoms when this variant was found but the severity of this variant was known when the Syrian hamster (a species of rat) was infected with that variant.
Entry of one more variant of Corona in India! Terrible monster without symptoms 2021-06-06T02:16:00-07:00 Rating: 4.5 Diposkan Oleh: Niya